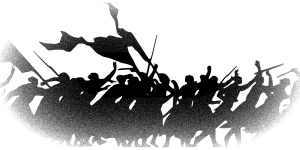 What is the necessary and proper roll of a nations body politic? Moreover, do the people have an obligation to rise up against a governmental power that no longer represents it?

To the latter, Yes. A simple answer, but one that must be more deliberately answered nonetheless. To begin then let us start in the years leading up to the American Revolution. Joseph Warren stated in 1772:

“And it is understandably true that the greatest and most important right of a British subject is that he shall be governed by no laws but those to which he has either in person, or by his representative, hath given his consent, and this I will venture to assert, is the great basis of British freedom; it is interwoven with the Constitution, and wherever this is lost, the Constitution must be destroyed.”

Much later, writing after his visit to a young United States, Alexis de Tocqueville observed that the people of this state, by the very nature of its Constitution, have allowed their sovereignty stripped from them. It is only returned on those times that have been prescribed by the same Constitution. Echoing this, in a way, Marx would later draw his readers to an uncomfortable facet of a republic. He would state that republicanism, in its fiction, is just monarchy with a different name. If for no other reason that the people surrender their sovereignty to others.

In understanding this, even prior to de Tocqueville and Marx, the ensigned of this States Declaration of Independence stated that for the people to secure their rights governments are created by the people and that they derive:

“their just powers from the consent of the governed: that whenever any form of government becomes destructive of these ends, it is the right of the people to alter or abolish it, and to institute new government.”

Yet, this forgetfulness is not wholly the fault of the politicians, although they and their parties have much to answer to. No. A great deal of the fault rests squarely in the laziness of the American people.

I feel that I need to be clear about this statement. The American people are hard working and seemingly care about the future of the State. Yet, over at least the last 30 years, they have collectively become more focused on individualist goals of wealth and greed, and less about their role in society and government. Increasingly the American people have left the politicians to tell them what is important. Left them to assume some kind of mandate to do as they will. In turn the government, and the capitalist system that supports it, has convinced the American people that working toward the self serving ends of the government and economy is in the people best interest.

In doing so the American people have become mollified and lazy. The body politic has slipped away while the modes of government and economy have been allowed to become dysfunctional to the health of the body politic and society. Knowledge of what constitutes a healthy society has faded from the people’s minds, those that should be listened to have been replaced by sexists, racists, fools, liars, and bullshitter, who’s goals are wholly self serving. If the nation is going to survive small measures are not enough any longer.

What then must be done? The modes of government, education, and economics, have become wholly dysfunctional toward society’s and the body politics health. Those that control the modes are corrupt and self serving. The political parties have manipulated the election cycle to a point that the people’s vote is nearly meaningless. The will of the body politic is, or has, been overthrown and close to collapse. Yet, without it the sovereignty of the State cannot be. So, what then must be done when half measures are useless? Revolution.

The body politic must regain its full sovereignty. It must pull back its will from the government, education, and economy, and start anew. These bodies have become destructive to the health of the people. They are are as a cancer that must be removed. In it place a new government put in its place. Rousseau warns early of the general will:

“The people is never corrupted, but is often fooled, and only then does it appear to want what is bad.”

“In order for the general will to be well expressed, it is therefore important that there be no partial society in the State, and that each citizen give only his own opinion.”

To that end I call for a Social Revolution. I call for the body politic to rise up into the streets. March upon your houses of government. Your city halls, your county court houses, your state capitals, the offices of your state and federal representatives, and demand the immediate resignations of every elected and appointed individual in government. Call for an immediate election to replace them all. Call for a new Constitution. Tear down the political parties that have divided this nation in the name of power. March in protest to your schools and demand an education that is focused on social welfare, philosophy, history, geography, government, not on producing and meeting the need of the economy. March on the corporate offices of business. March on the stores that represent and economy focused on its own ends and killing local small business: Walmart, Target, Lowe’s, Kroger, to only name a few. March on Wall Street and big banks that use your money to make themselves richer and feed the cancer of market purchased politicians.

Revolt against a broken system, break it down and build anew. The modes in place pull the people apart. But without the will of the body politic, the people, the heart of a society and nation, the state will fail. Make it fail and allow each citizen to give his or her own opinion.

Welcome to the World of Suzanne Burke.

It's a writers world, a world that seeks to explore and entertain

Philosophy and Poetry for the Mountains